Dr. Jordi Monés, the Medical Director of the BMF, has visited the MaculArt international meeting to set out the new hypothesis on the progression of AMD to geographic atrophy (GA). This is the thesis “Druzen Ooze: a novel hypotesis in geographic atrophy”, which is published in the prestigious scientific journal Ophthalmology Retina.

The new theory would explain how drusen ooze can activate the apical surface of the retinal pigment epithelium (RPE) by exceeding its capacity to maintain the environment of the photoreceptors. This would lead to the death of the RPE, probably through pyroptosis and necroptosis. Subsequently, there would be a continuous uncontrolled release of intracellular material and this would activate neighbouring RPE cells still further, propagate cell death and promote progression to GA as a vicious circle from cell to cell. This discovery was made during research work undertaken during the EYE-RISK project.

Dr. Monés also set out the results of the TREND study where the efficacy of ranibizumab in monthly regimens was compared to what is known as the “treat and extend” regimen. His address, “Efficacy and safety of ranibizumab 0.5 mg treat and extend versus monthly regimen in patients with neovascular age related macular degeneration: 12-month results from the TREND study”, assessed the pros and cons of the different application regimens.

The MaculArt Congress is an international meeting that has held its second edition this year. It draws top-notch ophthalmologists from all over the world who put forward the latest developments in the field of visual treatments. 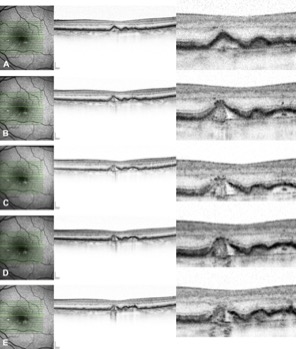