Dr Jordi Monés, MD, PhD, the ophthalmologist and investigator specialising in the macula, retina and vitreous, has presented the new hypothesis “Drusen ooze, a novel hypothesis  in GA” as part of the EYE-RISK project, during the SIG (Special Interest Group) “New Perspectives on sub-RPE deposit formation: discussing clinical and molecular progress”, led by Imre Lengyel of the Queen’s University of Belfast (QUB), also a partner of the EYE-RISK Project. This session enjoyed the participation of other international experts such as  Christine Curcio, Srinivas Sadda, Céline Koster, David Simpson and Richard Thompson.

“Drusen removal before irreversible damage of RPE might prevent disease progression and severity even without targeting the primary cause of Age-Related Macular Degeneration (AMD). Drusen are toxic by themselves and propagate a vicious cycle. Therapies addressing drusen are needed,” Dr. Jordi Monés concluded. He also gave those attending the article that sets out this hypothesis, which was published in the journal Ophthalmology Retina.

Anita de Breuk, of Radboud University Medical Center (RUNMC) presented  “Development of genotyping Assay for AMD: the Eye-Risk EU Project”, a study conducted by the EYE-RISK consortium of which the Barcelona Macula Foundation is a member, on the development of a platform for the genotyping of patients with AMD. Among the group of authors, Dr Jordi Monés was assisted by international researchers from the Erasmus Medical Center and the Université de Bordeaux, among others.

The study starts from the premise that genetic tests are currently limited to a low number of variants. The aim of this research has been to develop a genotyping platform for AMD that covers all the currently-known genetic variants and that can detect rare variants in AMD-related genes. This could lead to the development of scores of each patient’s genetic risk for the disease, the assessment of genetic variant associations with AMD, and the establishing of a validated genotypification of AMD.

This study genotyped 4,718 samples from 2,428 patients with the disease and from 1,297 individuals without it. Seventy single nucleotide polymorphisms (SNP) were genotyped successfully, while 17 SNP were discarded due to coverage or mapping problems, deviation from the Hardy-Weinberg (P < 10-4) equilibrium, low concordance of genotypes with other genotyping platforms (< 95%) or a high proportion of genotypes lost due to SNP (> 10%).

In the successfully genotyped SNP, a high concordance rate between the EYE-RISK consortium platform and other genotype platforms (96.02% – 99.96%) was observed. SNP allele frequencies and probability ratios for the association with AMD were similar to results reported previously.

The sequencing of the coding and adjacent regions of 10 AMD-related genes and three mimetic AMD genes identified 2,830 different rare codifications or splice site variants, which will be analysed in further detail to determine their involvement in AMD through single-variant association tests, genetic load tests and genotype-phenotype correlations.

In conclusion, a complete genotyping platform for Age-Related Macular Degeneration that successfully genotyped 70 SNP and the coding regions of 13 AMD-related genes and mimetic AMD genes.

Erkin Acar, another investigator from Radboud, presented “Metabolomics in AMD”, which highlighted the identification of 82 metabolites associated with AMD, emphasising the role of lipids and aminoacids and the energy metabolism in this disease.

Finally, Soufiane Ajana, of the Université de Bordeaux, presented: “Development of a prediction model for advanced age-related using penalized machine-learning approach: the EYE RISK Project”. Ajana said that the EYE-RISK prediction model includes a wider set of predictors and capacities than the models published up to now. This model can be very useful for identifying patients with a high risk of suffering advanced AMD.

All these results will form part of an AMD risk prediction tool and its progress that will be presented in website form soon. For further information on this project: eyerisk.eu 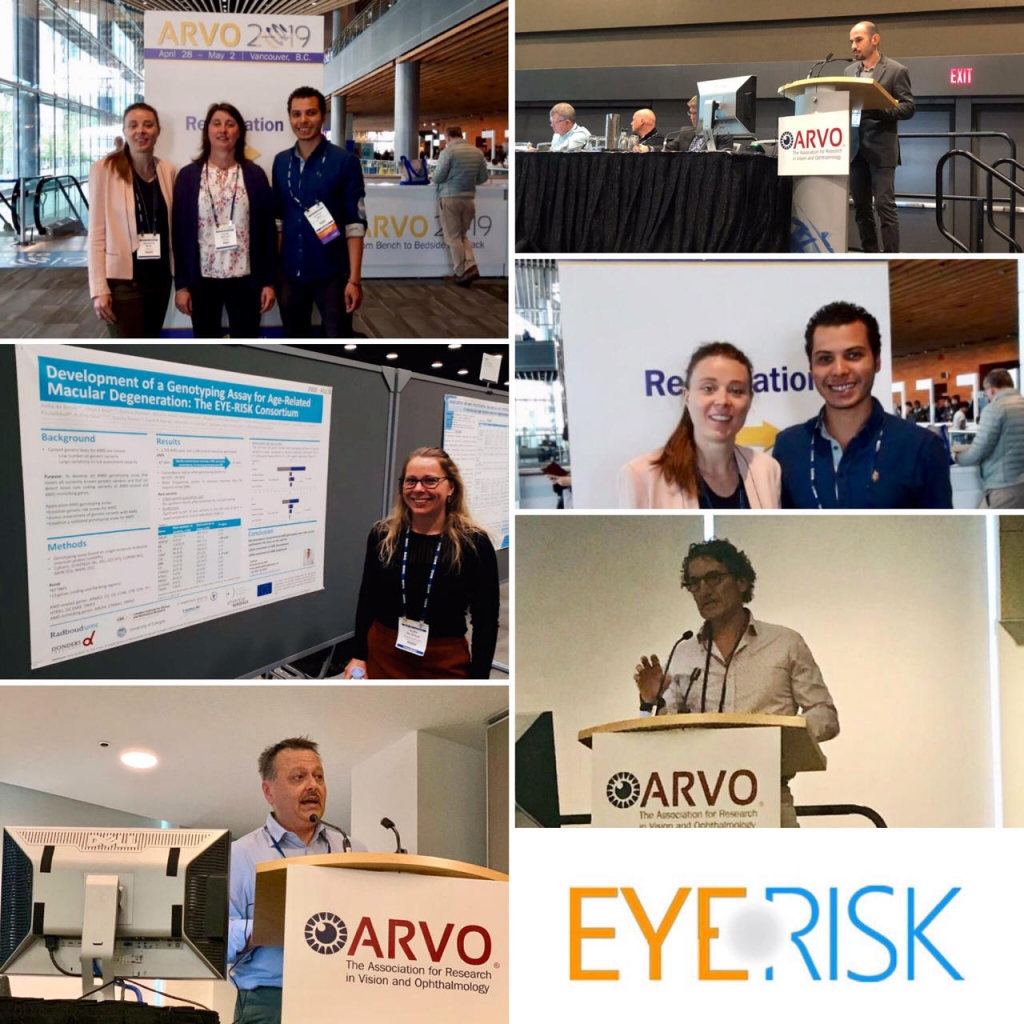