The retinologist Jordi Monés, the Director, principal investigator and one of the founding trustees of the Barcelona Macula Foundation, has delivered an informative workshop to specialised health journalists in order to explain the latest research being conducted in the field of age-related macular degeneration (AMD). He also ran through the evolution of treatments and progress in recent years

AMD progresses in successive phases. Some patients remain in the early stages of the disease for years without significant visual loss, while others progress rapidly to the more advanced stages in which vision deteriorates markedly. The two advanced types are neovascular AMD and geographic atrophy. The latter is thought to represent the end of the natural progression of the disease if neovascular AMD does not appear.

Dr. Jordi Monés, the Director, principal investigator and one of the founding patrons of the Barcelona Macula Foundation, explained that this is a very complex disease in which many factors interact simultaneously. Although the specific causes of AMD are unknown, in recent years there have been major advances driven, among others, by the discovery of over 50 genetic variants. In addition to genetic predisposition, it is important to highlight factors related to lifestyle or the environment, among others.

In this regard, a large part of the workshop addressed the research conducted in the international consortium EYE-RISK (Exploring the combined role of genetic and non-genetic factors for developing AMD: a systems level analysis of disease subgroups, risk factors and pathways), a project funded by the European Union’s Horizon 2020 Programme. 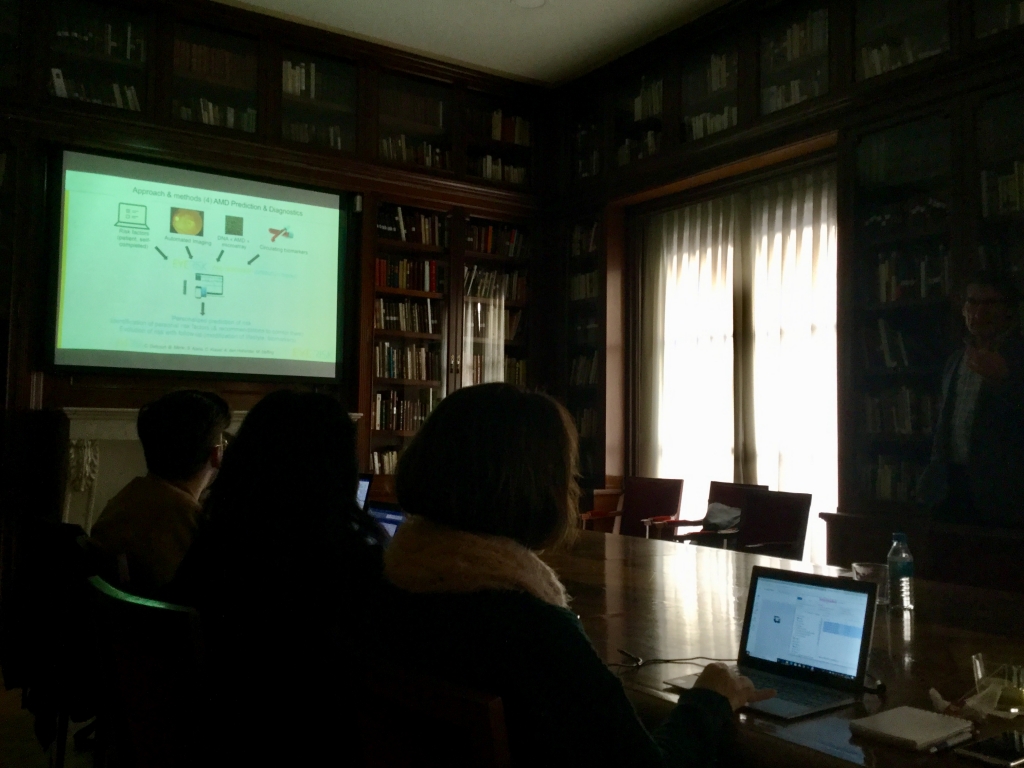 Dr Jordi Monés said that the researchers of the Barcelona Macula Foundation, in collaboration with the team from Queen’s University Belfast, have worked to establish whether there is a correlation between the phenotype and the genotype of AMD patients. That is, whether a patient’s genetic profile can determine the aspect of geographic atrophy and the aspect of the eye. For this, an innovative methodology based on Deep Learning (a type of artificial intelligence) is used and, if these hypotheses are confirmed, the development of treatments would have to correct the specific mechanisms by which the disease develops in each patient, what is known as “personalised medicine” or “precision medicine”: the right treatment for the right patient at the right time.

The ADVANCE.CAT project is another example of the research Dr Monés highlighted in his talk with the media. Its main aim is to develop medicinal products for human use from preclinical phases to their clinical application, based on genes (gene therapy), cells (cell therapy) and tissues (tissue engineering).

In this connection, Dr Jordi Monés discussed the study he heads, which is focused on geographic atrophy. In this stage, the progressive loss of cells of the retinal pigment epithelium (RPE) occurs in conjunction with secondary degeneration of photoreceptors, which results in the loss of central vision. To attempt to address this loss, there are three main areas of action: the prevention of the disease, slowing it down and the regeneration of dead cells. For years, the Barcelona Macula Foundation, as a partner of ADVANCE.CAT, has been committed to the research into cell therapy for regenerative purposes together with the Centre of Regenerative Medicine in Barcelona (CMRB), the Blood and Tissue Bank (BST) and the Miguel Hernández University (UMH). Together, they have validated the ability of induced pluripotent stem cells (iPSC) to differentiate into RPE cells, to be implanted and to survive in the retina of an animal model. Dr Jordi Monés explained that it has been demonstrated that implanted hiPSC-RPE cells are capable of integrating into the healthy retina and forming an epithelial monolayer. It has also been seen that the integration capacity of these cells is not optimal in the atrophic zone and, in any case, they integrate only occasionally.

This, in a clinical context, may support the hypothesis that the use of iPSC-RPE could possess integration capacity beyond the limits of geographic atrophy, which could potentially have trophic or supportive effects on native cells, thereby contributing to cell survival and slowing atrophy progression. 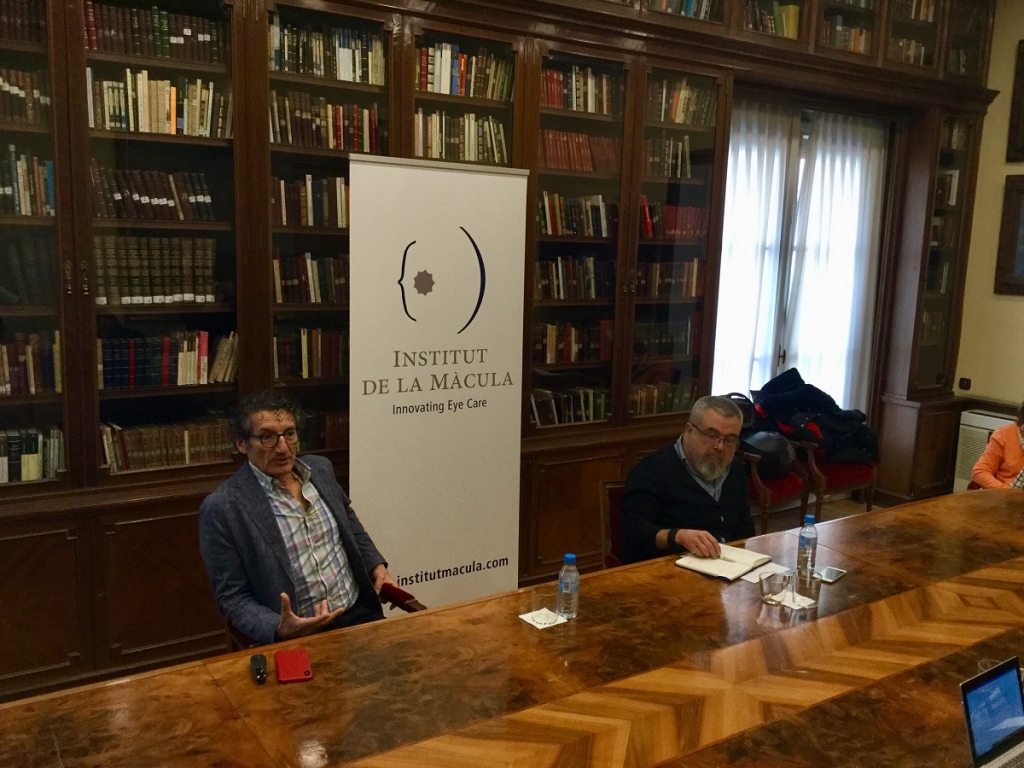 The translational objective in the medium term will be to attempt to promote a Phase 1 clinical trial to assess the safety of this cell therapy and subsequently begin a second phase to try to show how disease progression is delayed.

This work has received the support of ACCIÓ (Catalonia Trade & Investment, Government of  Catalonia) as part of the ERDF operational programme (European Regional Development Fund) of Catalonia 2014-2020.

Finally, Dr Jordi Monés set out the major difficulties that still need to be resolved in order to make progress in gene therapy, adding that he is committed to the advances being made with stem cells to regenerate the retina. Work is currently taking place with RPE cells derived from human embryonic stem cells (hESCs) so that these can be implanted in the retina without producing adverse effects.