Dr Jordi Monés MD, PhD, the Medical Director of the Barcelona Macula Foundation, collected the 25,000 € Prize. It will enable the implementation of new research to study the relationship between the oral and intestinal microbiome and age-related macular degeneration (AMD)

The Associació Discapacitat Visual Catalunya: B1+B2+B3, which advises and accompanies visually-impaired people and holds the City of Barcelona’s Medal of Honour, on Monday awarded the Barcelona Macula Foundation (BMF) the 25,000 € First Prize for Research into Visual Diseases for the research project MICROBEYEOME: A study of the intestinal and oral microbiome in age-related macular degeneration (AMD). The project will be conducted in collaboration with the Centre for Genomic Regulation (CRG) and the Institut de la Màcula.

The awarding jury comprised members of the Associació Discapacitat Visual Catalunya: B1+B2+B3, the Catalan Society of Ophthalmology and the Official College of Opticians and Optometrists of Catalonia. The purpose of the Prize is to advance in the cure and prevention of visual diseases.

Dr Jordi Monés MD, PhD, the Medical Director of the BMF, collected the Prize on behalf of the foundation. In his speech, he expressed his particular gratitude to the Director of the Association, Manel Martí, for the longstanding relationship of collaboration and support that it maintains not only with the BMF but also with various research centres in our country and its tireless willingness to seek funds for research, a field that everyone agreed requires the support of all.

Dr Jordi Monés congratulated Mr Martí for having organised the Prize and singled out Dr Eduard Castells Cuch, the former Head of the Cardiovascular Surgery Department and Service of Bellvitge University Hospital, for his voluntary cooperation and initiative that has made this possible.

The microbiome is the ecosystem formed by the microorganisms that inhabit our body, mainly the intestine. Recently, there has been an increase in research that relates the state of the microbiome to human diseases. New studies suggest that this may play an important role in various eye diseases and, in particular, in the pathogenesis of age-related macular degeneration (AMD). Unlike other fields, the microbiome is potentially modifiable and therefore, is of greater therapeutic interest.

The Barcelona Macula Foundation study aims to characterise the intestinal and oral microbiome of patients diagnosed with AMD through RNA 16S sequencing and compare it with the microbiome of healthy patients. This will identify whether a single microbial composition can be associated with a specific phenotype. Given the possibility of modifying it, this study could open new avenues of investigation into the prevention and/or possible treatment of AMD.

During the closing ceremony, Mr Fabregat provided an overview of the effects of visual diseases in Catalonia and how they are addressed by the administrations involved: the Departments of Health, Education and Labour, Social Affairs and Families of the Government of Catalonia. He stressed the importance of not only conducting research into anything related to the treatment of diseases in the purely clinical field, but also adopting more basic approaches aimed at preventing the onset of diseases and advancing in their development in general with all that this implies, on the one hand, for those affected and, on the other, for the sustainability of the system.

At the image, Dr. Jordi Monés MD, PhD during his speech. Behind him, from left to right, Robert Fabregat, Manel Martí and Dr. Eduard Castells.

Below, the BMF team with the other candidates for the award and the representatives of the institutions and entities participating in the jury. 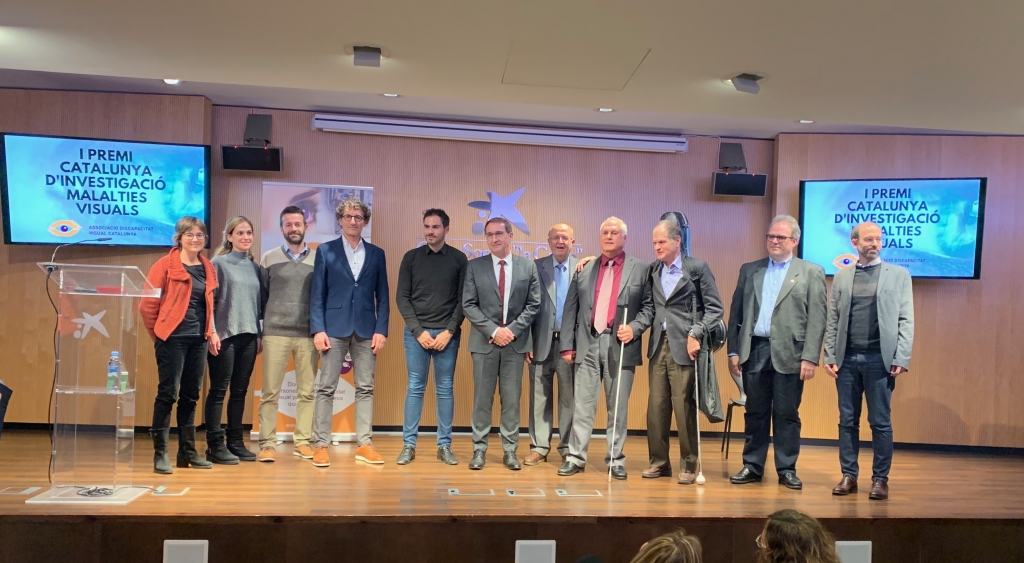